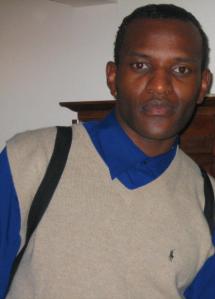 Today’s Friday Feature is Arthur Kalala Katalayi. Hi Arthur, and welcome to the blog! Tell us a little bit about yourself.
First of all, thank you for inviting me ! Well, I am a Consultant within the financial industry. In parallel, I am also a Senior Advisor & Global Ambassador for Giving Back to Africa, and I currently live in Belgium.

That’s interesting! How did you end up in Belgium?
Being originally from the Democratic Republic of Congo (DRC), I was born and raised in France and went on to pursue high-school in the United Kingdom at 16. I ended up staying there for three years, and subsequently went to the United States to go to college, play soccer, grow as an individual and ultimately live my American Dream. Understandably, it is difficult to leave the US once you’ve lived there for a certain amount of time but after 10 years in America, I was ready to experience something different; and that is when Belgium came into play. My spouse, albeit born and raised in the DRC, did all her higher education in Belgium and, interestingly enough, it is the country where we got married in 2007 so it came as a kind of natural choice for us. All in all, my story is the one used as a plateau for my upcoming Bildungsroman novel titled “The Katalyst”.

Ah! Another novelist! Excellent! Tell us a little bit about it.

“My spouse Nathalie and I after a fundraiser for GBA at Rider University.”

“The Katalyst” is a tale about a young boy of African heritage, with a European background but who, since his early years, has an American Dream. The story is one that depicts the psychological growth of a child into a teenager and from an adolescent into a man. There is also an acute identity crisis involved since the protagonist – who goes out in the world to seek his fortune – has lived in so many places that he is not quiet sure what his true identity is after all ; he gets lost amid it all, only to find himself in the end…The tale is also about a quest for destiny and maturity, the latter of which the protagonist achieves gradually but through formidable obstacles and difficulties. All of which, in the end, catapults “The Katalyst” onto his destiny….

I look forward to hearing that you’ve found a publishing home for “The Katalyst.” I know it can be a long journey from idea to book! Speaking of long journeys, weren’t you just in Africa? What were you doing on that trip?

“The African Leadership Academy is doing amazing educational work and I am happy to announce that Giving Back to Africa will partner with them in the near future.”

Yes I was, indeed ! I have just visited South Africa for the first time, as well as Lubumbashi in the Southeast of the Democratic Republic of Congo. Johannesburg was a novel experience for me and I felt very at ease in Lubumbashi since it was my second time visiting and, in addition, my Dad was born there so there was a natural sense of belonging. In regards to Johannesburg, I wanted to visit because there is so much history in that place and South Africa is the most thriving economy on the African continent. Furthermore, I am seriously contemplating moving to Africa in the foreseeable future, so it was only logical for me to gauge the lie of the land first.

Whilst there, I was honoured to visit the African Leadership Academy campus and met its founder, Fred Swaniker.  Soon, some of our best students in Kinshasa will have the opportunity to study at that world-class institution once they turn 15 ! On the same note, Lubumbashi was equally great and I also had the privilege to tour the Georges Malaika Foundation school. They are doing similar work as GBA but there is so much we can learn from them, that I wanted to be able to see that for myself ; which thankfully was very, very enriching.

Giving Back to Africa sounds great. Can you tell us a little bit more about it?

Giving Back to Africa is a non-profit organization headquartered in the state of Indiana, but that has operations in Democratic Republic of Congo, where we operate since 2006 and have an orphanage that we run. There, we sponsor 250 kids who are given the opportunity to have access to a good education. GBA invests in Congolese youth by creating and implementing a community-based servant leadership educational program and curriculum that combine teaching life-long leadership skills with community service. In a nutshell, the goal is to build creative thinking and problem solving skills in the kids that will allow them to become change agents in their country and community. As far as my role is concerned, I am responsible for raising the profile of the organization globally, as well as broker partnerships with groups – be they corporate, educational or else – that are able to help us fulfill our mission. I reckon it is important to help others, especially when it comes to education which is one of the most fundamental factors of economic development. I know I wouldn’t be speaking to you if it wasn’t for the education I received, and it is equally important to mention that I did not do it all by myself. Many people have helped me get on the other side of the fence several times, so I am just trying to make a positive difference on other people’s lives as well. Besides, it is always better to give than to receive; that is how I was brought up. Surely, being part of a great organization like Giving Back to Africa is a huge honour and one of the best thing I have been given the chance to do in my career.

A worthy endeavor! To find out more about GBA and find a way to help, please visit their website: http://givingbacktoafrica.org/

Thank you so much for talking with us today, Arthur!

Author of GOLDEN BOY (2013), THE BITTER SIDE OF SWEET (2016), and TREASURE OF THE WORLD (2021). Published by Penguin Books for Young Readers Find out more at www.TaraSullivanBooks.com Or, follow me on Twitter: @SullivanStories
View all posts by Tara Sullivan →
This entry was posted in Interesting People, Travel, Writing. Bookmark the permalink.